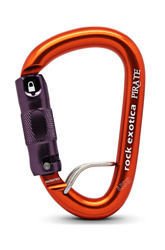 The WireEye series of carabiners combines the utility of a standard carabiner with the safety and capability of a lanyard pin, or captive eye. The WireEye holds gear, lanyards and lines with enough resistance to help prevent gear from moving past the end of the carabiner, but releases easily when lifted up. When the potential for dangerous leverage or cross-loading can occur, the WireEye helps keep the carabiner oriented correctly, and the gear where it belongs.

AUTO-LOCK
Pull down toward palm, twist and open. 3-stage mechanism.
Producer
Rock Exotica
Product code
C1 WEA
Ask for this product
Write your opinion
This page uses cookie files to provide its services in accordance to Cookies Usage Policy. You can determine conditions of storing or access to cookie files in your web browser.
Close